The Incredible All  ‘String’ Band

Reinhardt approached Grappelli in the Montparnasse jazz-and-tango club Le Croix du Sud in Montparnasse and told him he wanted a violinist “who plays hot” for a new band he was forming. Grappelli was chary of giving up his steady gig to join forces with this sinister-seeming young fellow, whom he described, according to biographer Geoffrey Smith, as looking like a “gangster straight out of an American film,” with “skin the colour of cafe au lait and greasy hair black as coal.” But they jammed together informally a few times during the next two years and discovered a great mutual affinity as jazz improviser’s.

Associate – Andre Ekyan was born in Alicante, Spain, October 1907.  No-one could have foreseen that he would become one of the most important pre-war pioneers in the French jazz scene and an important soloist on his instrument.  His mother was a Hungarian; his father was from Armenia. His official name was Echkyan. He was raised in France and as a kid he learned to play the clarinet and saxophone.

The Hot Club of France itself had been set up by jazz enthusiasts in 1932 (University Jazz Club), and aimed at organising concerts and featuring selected musicians. Django’s playing at this time was being described as “delirium incarnate” and the idea of a group to represent the club was already in the air. 5 Rue de L’isly, Paris

In 1934, Django Reinhardt plays in the orchestra of Louis Vola at the Claridge, which is also includes the violinist Stephane Grappelli. Stephane Grappelli and Django Reinhardt founded a combo that will take the name of “Quintet of the Hot Club of France”. This group also includes Django’s brother Joseph, also known as “Nin-nin,” and Roger Chaput on guitars and Louis Vola on bass. The five musicians invent an innovative music that was very successful. This is the first jazz band that uses either the brass or reeds, or drums. Jazz is then object of worship for the purists of the Hot Club of France.

Encounters
Stephane Grappelli first met guitarist Django Reinhardt in 1931, however he said that he saw him perform as early as 1929. When Grappelli was performing at the “Le Croix du Sud” club in Montparnasse, Django was in the audience and asked Stephane to join his group. Stéphane was apprehensive, due to Django’s menacing appearance, and his reluctance to give up his steady gig. But the 2 began to perform together casually over the next few years, where they discovered how much they shared, especially in their love for the early jazz innovators.

Grappelli and Reinhardt formally began to perform together in 1934, with the assistance of Hugues Panassié and the other founders of the Hot Club of France. After several performances where they experimented with instrumentation, the two men constructed an unprecedented jazz line-up of 3 guitars, bass and violin, which they dubbed the “Quintet of the Hot Club of France.” Grappelli, Reinhardt along with guitarists Joseph Reinhardt and Roger Chaput, and bassist Louis Vola helped France develop its own sound as a jazz nation.

The quintet drew their inspiration from American jazz and Gypsy tradition. The quintet continued to influence the growth of jazz into swing, recording American pop songs throughout 1934-1939. These compositions would ultimately comprise the quintet’s stylistic heritage. The success of the quintet was largely due to Stephane and Django’s astonishing technique and expanding the harmonic boundaries of a string band.

One of the quintet’s most famous songs was Ultrafox.  On this track, Grappelli effortlessly plays the introduction melody, perfectly executing the medium tempo of the song. Stephane proves to be a powerful counterpoint to Django by taking the rapid language of Reinhardt and combining it with his more subtle technique.

As the late Ralph Gleason said about Django’s recordings, “They were European and they were French and they were still Jazz.”  Django with very Chic Flat Hat – like a Geordie Stottie Cake and those Hi-Rise Pants – with Braces the same outfit he boastfully leaned on his sports car with.

The enabling condition for the birth of the future Quintet was the orchestra which was put together by the go ahead Louis Van to play for the bloodless thés-dansants at Claridge’s Hotel in the Champs Elysées The group included the pick of the Parisian jazzmen, but clearly there could be no question of wild jazz performances in this palace of discreet luxury. Milk-and-water “table music” was the order of the day. For the musicians, the intermission were a welcome relief which soon took an interest of their own. “We were alternating”, Grapelli remembers, ‘with Manual Pizzaro’s Argentinian Orchestra. Django and I used to take our breaks stretched out on dusty sofas in a big disused room behind the stage. Of course, Django kept his guitar with him and sometimes he’d idly play a few notes to himself behind a screen. One day while I was tuning my violin we spontaneously started playing Dinah, just like that, to amuse ourselves…and once we’d started, we never stopped. Over the days the others began to join in – Django’s brother Joseph, Roger Chaput, and Louis Vola on bass. We were both fascinated by the sound we were making, and of course we played other pieces. From then on, we couldn’t wait for the intermissions.” After hours they would repair to a late-night musician’s hangout, the “Alsace” Brasserie in Montmartre, to carry on the good work. None of the participants suspected the fame that lay in store for an all-strings group that come together in such a haphazard fashion.

The break-through might never have happened if organisers of the Hot Club had not found out what was going on and exerted themselves to promote the idea of “Jazz without drums or trumpet”. Even then, things didn’t go smoothly. In September 1934 rehearsals were organised at the “Florence” with a view to a recording audition with the Odéon company. But the firm decided against releasing the 2 sides that were produced by “Delaunay’s Jazz Quintet”, finding them decidedly “too modern”, despite Django’s precaution of adding a vocal refrain “to make it more commercial”.  It was a bad setback for the musicians. but failed to discourage the enterprising Pierre Nourry who was more determined than ever to promote, come hell or high water, this “new hot Jazz sound’ And this was how the group was described on the poster for the famous concert at the Ecole Normale de Musique on December 2nd, 1934 – the event which definitively marked the launch of the Quintet of the Hot Club of France and from which can be dated their rise to fame. The audiences of the day, alarmed by the noisier forms of Jazz, fell victim at once to the charms of this new music. There were still doubters, such as critics John Hammond or Hugues Panassié, who found the sound too “gypsified”, or the critic who called Django “a clown with a mandolin” – but soon everyone was joining in the general fervour. 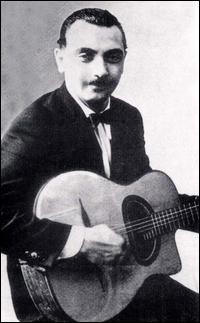 This band name was a misnomer. On a surviving copy of the demo records, an unknown hand had scrawled the name and style of music as “Delaunay’s (jazz)” purely for identification on the label. These test takes survived thanks to Delaunay. He found them just before they were cast out in the 1930s, when they had been forgotten; he played them on his jazz radio broadcasts and later released them commercially.

The musicians’ community, including American jazzmen passing through, or settled in Paris all as one man went overboard for Django’s exuberant inspiration. In 1935 alone the clubs where Django was working attracted visits from soloists of the order of Louis Armstrong (at the Brick Top” in Montmartre), Coleman Hawkins and Arthur Briggs (at the “Stage B” in Montparnasse), Benny Carter (at “Chez Florence”), Bill Coleman. Frank ‘Big Boy’ Goudie, Fletcher Allen, and many others. What jam sessions! What memorable choruses were lost in the ether for ever ! 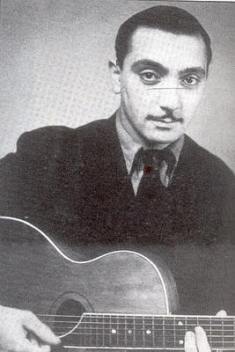 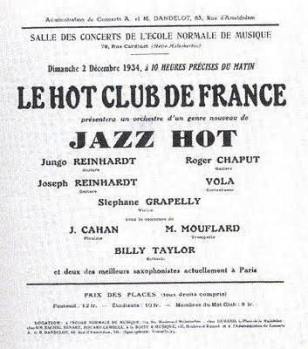 Maurice Mouflard on Trumpet.
The “Hot Club of France”, a club where members listened to recorded and live music and discussed Jazz. It was founded by Pierre Nourry a friend of Delaunay’s.

One of the sound engineer asked why they kept changing the performance between takes… on the second session the Ultraphone Director decided to lower the volume of the remaining songs (after Dinah), he was worried about defective recordings (too much dynamic…), that was a bad move according to Panassié since the volume of the remaining 3 songs is quite low compared to Dinah. According to Panassié, Dinah was the best recorded piece of the day 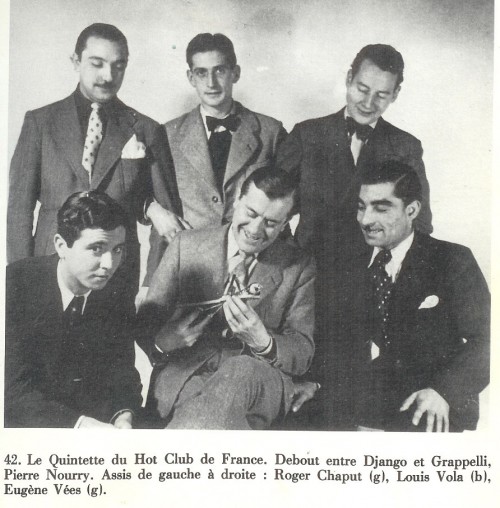 Louis Vola, the bass player with the original Quintette Du Hot Club De France, an affable, ‘Maurice Chevalier‘ type of man, he talks glibly of his 15 year old granddaughter who plays the piano and can relate many tales about Django. He really knew Django the longest, starting at Toulon, where Vola had a band. He heard the 2 gypsy brothers, Django and Joseph playing on the beach one night and invited them to jam after hours with some of the members of his band. One member of note was Stephane Grappelli. Vola subsequently moved to the Palm Beach Hotel at Cannes and hired Django alone, as an accompanist for his own accordion. Later, when Vola switched to bass, he hired Eugene ‘Nanine’ Vees, Joseph Reinhardt and Stephane Grappelli, in addition to Django – thus the Quintette Du Hot Club De France was born. Shortly after it was started on its recording career by Charles Delaunay and Pierre Nourry. (Below) 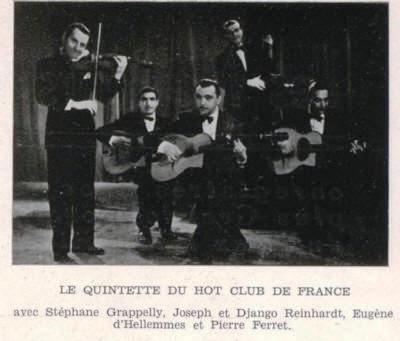 Quintette at The Hague 1937 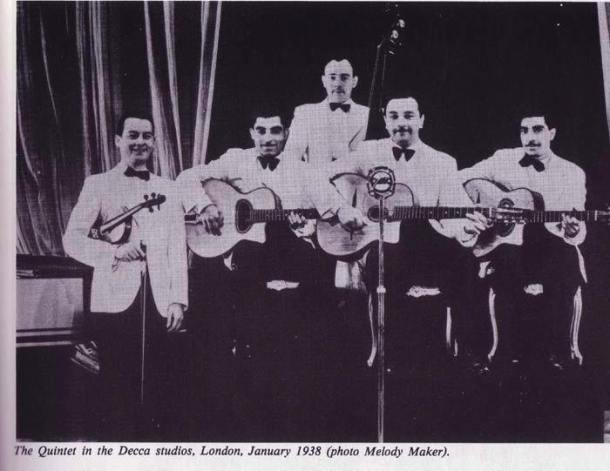 Contradiction? Chaput and Vola are also mentioned as present for these dates? 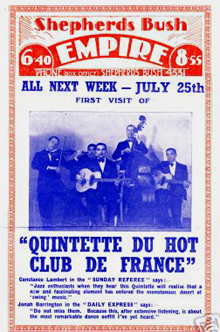 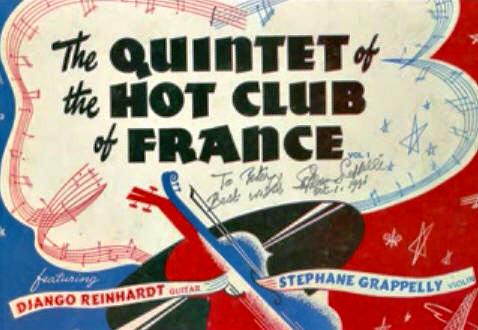 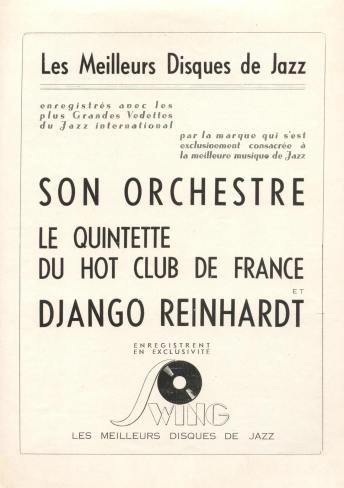