Evolution of the Original Quintette

With the outbreak of war in 1939 Reinhardt made his way back from England to France, leaving Grappelli in Britain.  Django spent the 1st winter of the war playing in Jimmy’s Bar in Montparnasse; but in spring 1940 the German blitzkrieg led to the speedy fall of France. He fled the city when the Germans occupied Paris on June 14th, but returned after the French surrender left northern France under occupation.
Django was considering reforming some kind of Quintet. He had hoped right up until May 1940 for Grapelli’s return, but Stephane had decided to remain in England.

Django realized that such a project would require organizational skill that he himself did not possess. His first thought of getting Michel Warlop to help in this project, but of course he was otherwise committed. Georges Efrossé, then playing with Django’s friend Sarrane Ferret who was also a 1st class violinist – or was he the obvious answer to form a new style of Quintet?

Django eventually decided to install the clarinet of Hubert Rostaing in place of the Violin as there was no point trying to replace Stephane Grappelli.  Rostaing, was a technically skilled and advanced clarinettist who also doubled on tenor sax. Regrettably, this new quintet did not last long. Django decided, as he was pretty much a star in his own right, that freelancing was for him the best bet. Rostaing would play with Django on and off through to 1948.  Instead of having 3 guitars as before, Reinhardt cut back to 2 (using his brother Joseph Reinhardt) and added the Algerian drummer Pierre Fouad.

At 1st the group was also known as the Quintet of the Hot Club of France.  Its debut, Rhythm Futur, is a piece that lives up to its futuristic name, at least harmonically.  It is clear from the start that Rostaing’s impressive technique and sound (sometimes hinting at Artie Shaw) works well with the guitarist.  The session also includes the minor-toned Blues.

Probably to avoid being noticed by the Nazis, most of the standards played by the Quintet during the war years were issued under their French titles, with the exception of Sweet Sue and All Of Me.  Exactly Like You (“Pour vous”) has Combelle’s last appearance on the 13 December set, showing off his tenor playing along with Rostaing’s clarinet.  The classical melody Fantaisie sur une danse norvégienne is turned into a delightful exercise in swing by the Quintet with Django showing once again in his chordal solo that he had no competitors among guitarists of the era (other than Charlie Christian).  Vendredi 13 may have been recorded on Friday the 13th but the musical luck was very good that day; Combelle helps out by ringing some bells during this exotic piece.  Another classical melody, Liebesfreud, is full of exuberant joy.  The lesser-known Reinhardt–Grappelli piece Mabel (previously recorded on 14 December 1937) has a very advanced and tricky chord structure that challenges the musicians to create fresh melodic ideas.  Little White Lies (retitled “Petits Mensonges”) has an additional theme added by the Quintet (heard during the guitar solo) that makes this version sound fresh and quite different than usual.  On the traditional Dark Eyes (or “Les yeux noirs”) and  Sweet Sue, Just You, Reinhardt really cooks, played heated single-note lines during his spots.

The same group with a change in bassists and several guest appearances by Alix Combelle on Clarinet and Tenor Sax, recorded 13 selections on 13th and 17th December 1940. Combelle, who had sounded quite impressive on a famous 1937 4-saxophone date with Coleman Hawkins, Benny Carter and Andre Ekyan, was an underrated Clarinettist and a Tenor Sax with a big tone influenced by Hawkins.  Swing 41 really benefits from the inclusion of the 2 clarinets who blend together very well.  The clarinets take a mysterious introduction to a remake of Reinhardt’s most famous original, the haunting ballad Nuages. 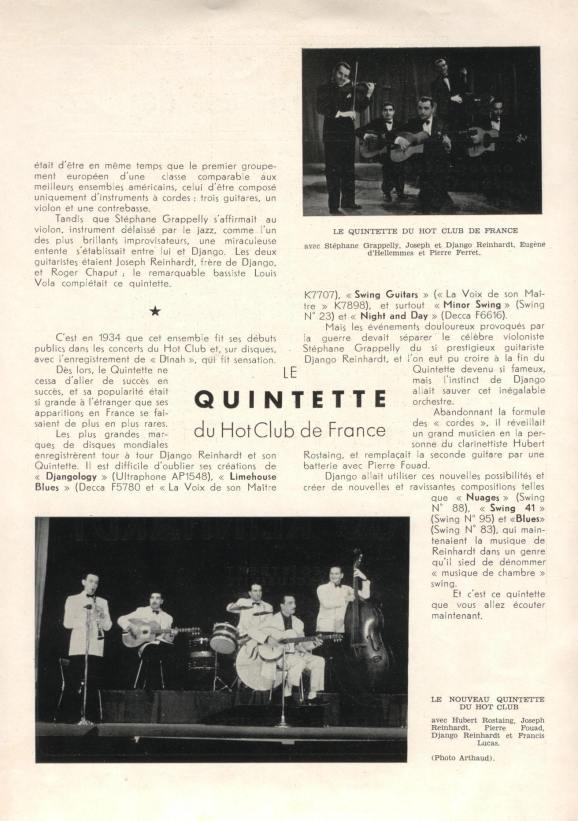