Freddy Legon was born in 1925 in Bermondsey South-east London. His mother used to play the Piano at family gatherings for entertainment and his father bought him a banjulele on his 14th birthday which made him a Player in the Parties too.  He worked as a Draughtsman on commercial or industrial kitchen & restaurant planning. As the vast majority of Jazz Musicians of the British Jazz scene of the time, he never gave up his Day Job to become a full-time Jazz Musician. At the age of 17 while listening to Jazz Programmes on Radio he fell in love with Jelly Roll Morton’s Red Hot Peppers Band. He then bought different Instruments from a Pawn Shop and created a Duet with his cousin Bill Bailey.  Freddie played the Clarinet and Bill the Guitar and they both sang too. By 1939 the Duet called ‘Blue Rhythm Boys’ were playing at the local Church Youth Club and others Clubs with a Repertoire mainly based on Old Folk Songs and modern tunes of the day. After some time Freddie changed the Clarinet for the Banjo combined with the comb & paper and his cousin played the Guitar and the Kazoo.

The Duet took part in an Audition in Carl Lewis’s Talent Radio Show and they came out in 2nd place. Freddy Legon & Johnny Jones formed the Original London Blues Blowers. They were featured in Jazz Broadcasts and as guests in the Rhythm Clubs that flourished on the fringes of the music scene, mainly playing Spasm Music & Jug Band Music. They did Broadcasts and played as Guests in the Rhythm Clubs in London, Jam Sessions in Pub Basements & Record Recitals in Red Band organised by George Webb along with the Professional Musicians of the time.  The Combo broke up in 1948 when the 2 Guitar players began playing in various Dixieland Bands. While Freddy Legon was playing Guitar & Banjo with the Humphrey Lyttleton Band in 1951, he advised a 16-year-old Charles McDevitt on the type of Banjo he should take up.

In March 1948 they broke up and he went to play the Banjo for a newly formed Band called Mark Daniels’s (Trumpet) and the Delta Jazzmen. He stayed with the Band until 1951. During that time they toured around England, participated in Broadcasts and did two sets of recordings for Delta label. New Jazz clubs started to open up around the country in the early 50s, such as the Delta Rhythm Club in New Compton Street, Soho. They were also initiatives to create an Educational Arena for the Jazz Music. Until that time the Musicians always played in front of a seated Audience but suddenly a new trend was introduced getting rid of the chairs & tables and allowing the audience to Dance to the music. All the Bands followed and that brought bigger Audiences to the Clubs. 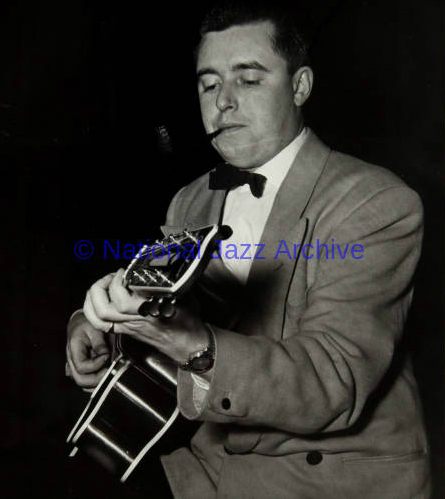 After leaving Mark Daniels’s Band Freddie joined Humphrey Lyttelton’s Band (1951-56) where he mostly played the Guitar. Micky Ashman was on the Bass, Johnny Parker on the Piano, Wally Fawkes on the Clarinet & Humphrey Lyttelton on the Trumpet. They played New Orleans Style Jazz and they crossed over the Traditional borders introducing Spanish & West Indian influences. This was the top Mainstream Band of the ‘transitional’ period of Jazz in Britain and the 1st one which got a contract with a major Label Company (Parlophone). From the 1st year they filled up every single place where they went.
Humphry Lyttleton’s Band (Touring)
Trumpet: Humphrey Lyttelton. Clarinet: Wally Fawkes. Alto: Bruce Turner. Piano: Johnny Parker. Bass: Micky Ashman. Guitar: Freddy Legon. Drums: George Hopkinson. Arrangers: Humphrey Lyttelton, Johnny Parker.
I once had a Banjo in my own Band. It was played by Freddy Legon, who also played Guitar. One night, in a Concert in Rouen, responding to wild calls for an Encore I accidentally brought my Counting foot down on Freddy’s Banjo which was lying carelessly on the floor – smashing it to smithereens. – Humph

Because they were all working during the day, they used to play every Wednesday & Saturday night and from time to time they would do Afternoon Sessions, extra nights & Broadcasts in the London area. The Broadcasts were mainly for BBC Radio 2 and sometimes for TV, i.e. educational programmes or quiz shows which had little to do with the type of Jazz they played in the Clubs.  For the Gigs outside London & Abroad, they would always choose weekends or used their Holiday allowance.  In Christmas 1956 he felt tired, the Band was more successful than ever and they had numerous Gigs to attend, although they had a very good communication among the Band members Freddie felt he couldn’t cope, it was getting harder & harder to get time off from work and they hardly had any time for rehearsals.

Freddie went back to play with his cousin Bill Bailey who had a new Group called Skiffle Group. They did a Saturday program called Saturday Skiffle Club with Bryan Mathew.  The Bill Bailey Skiffle Group made 7 appearances, in which Freddie played Electric Guitar. For the next 15-yrs they played together in Clubs in Kent, Soho and in underground Cellars.

Trombonist John Mason with the Rigden-Legon Band from 1966. John says:
‘Sandy Brown was a regular guest at The Terminus Hotel Jazz Club, Gravesend, playing with the Rigden-Legon Jazz Unit.  Sessions were every Sunday evening, 7.45 – 10.30. After a couple of visits Sandy got friendly with Bill French the Landlord,  from then on Sandy would appear around 6pm to play darts with Bill, along with Scotch & Bitter, he was always Jolly by the time we had to play!  I started the Jazz Club at the Terminus in 1961 with a 3-Band Rota; Trevor Jeavon’s Jazzband, The Excell Jazzband & the Rigden-Legon Jazz Unit. By 1964 I booked guests, George Chisholm, Sandy Brown to play with the Jazz Unit and the Tony Coe-John Picard Quartet and Sounds by Nine, led by Eddie Bayfield piano including trumpeter Dave Holdsworth.  ‘The Rigden-Legon Jazz Unit was a fine mainstream band led by Freddy Legon (ex Humphrey Lyttelton) and Reg Rigden (ex George Webb`s Band) including John Lee on tenor. I handed over the Club in 1967 and it went avant-garde and downhill.

Any more images of Freddy out there??