and Emulated on Film

Django, Loulou Gasté, Line Renaud, Pierre Guillermin & Hubert Rostaing, Django and Rostaing bidding farewell to Line Renaud before she flies to London aboard TWA for her 1st gig in the UK, 1951

Reinhardt has been portrayed in several films, such as in the opening sequence of the 2003 animated film Les Triplettes de Belleville. The 3rd and 4th fingers of the Cartoon Reinhardt are considerably smaller than the fingers used to play the guitar. Reinhardt’s legacy dominates in Woody Allen‘s 1999 Sweet and Lowdown. This spoof biopic focuses on fictional American guitarist Emmet Ray‘s obsession with Reinhardt, with a soundtrack featuring Howard Alden. He is also portrayed by guitarist John Jorgenson in the movie Head in the Clouds. In the Italian western Django, the title character is presumably named after Reinhardt. In the climax of the movie, his hands are smashed by his enemies and he is forced to fire a gun with his wounded hands. Reinhardt is also the idol of the character Arvid in the movie Swing Kids, where the character’s left hand is smashed by a member of the Hitler Jugend, but is inspired by Reinhardt‘s example to keep playing.

Reinhardt‘s music has been used in the soundtrack of many films, including in The Matrix; Rhythm Futur, Daltry Calhoun, Metroland, Chocolat, The Aviator, Kate and Leopold and Gattaca; the score for Louis Malle‘s 1974 movie, Lacombe Lucien; the background for the Steve Martin movie L.A. Story; and the background for a number of Woody Allen movies, including Stardust Memories. Reinhardt‘s music has also been featured in the soundtracks of several video games, such as the 2002 game Mafia: The City of Lost Heaven and several times in the 2007 game Bio Shock.

La Route du Bonheur (1952) (M2573)
Distributed by René Chateau Video (around 1992)
Originally distributed by Fernand Rivers.
Full length movie, Franco-Italian production.
Realized by  Maurice Labro and Giorgio Simonelli.
Django appears for a short sequence of the movie dressed as a gypsy with Hubert Fol, for a single piece.
There is numerous music scene in this movie, Armstrong, Bechet, Rostaing, Django

Django in the Netherlands

Jazz Hot (Film – Great Britain / 1938)
The story has it that Django Reinhardt was never filmed with synchronized sound and picture (only a few silent images could be seen very quickly in the newsreels…)  This film, unknown to the historians, is a great event: we can see Django Reinhardt, the master of the guitar, playing in his intimacy or on stage, with Stéphane Grappelli and other musicians during the top level period of the Hot Club du France Quintet, around 1938.

French Film of Django and the Quintette

Django at “Bal Tabarin” with his Band in 1944.
Very short sequence with dancers and dubbed, inconsistent sound. Initially, the band is playing “Night & Day” but when it cuts to Django, the sound jumps and he briefly plays something that is too short to identify for certain. Could also be a bit of newsreel footage but the caption that appears on the screen indicates it was probably reproduced as part of a “documentary” of some sort.

The Triplets of Belleville

Django Films is a film studio run by the Oscar nominated French animator Sylvain Chomet. The studio, named after the jazz guitarist Django Reinhardt, is based in Edinburgh, Chomet’s adopted home. produced The Illusionist, based upon a hitherto unproduced script by Jacques Tati. The Django Films studio was set up solely to make this film, and is now being dismantled

Les Triplettes de Belleville
The animated film satirically pokes fun at national stereotypes and clichés foreigners spread about French and Americans. It laughs at the stereotype of the French (for example their alleged obsession with the Tour de France, or their so-called fondness for eating frogs) as well as the image foreigners have of Americans in their allegedly exaggerated obesity and lewd manner.  The film features no spoken dialogue per se, though some spoken words (such as Tour de France radio commentary and a speech by Charles de Gaulle on evening TV) are included sporadically. French people speak with an “old” accent and American people speak with a Quebecer accent.

Reinhardt has been portrayed in several films, such as in the opening sequence of the 2003 animated film Les Triplettes de Belleville. The 3rd and 4th fingers of the Cartoon Reinhardt are considerably smaller than the 2 fingers used to play the guitar.

Django in Cartoon Caricature with Josephine Baker and Fred Astaire
Les Triplettes de Belleville – Django not only fretting with 2 fingers but his toes take over whilst he enjoys his Gitanes.

“Belleville Rendez-vous” is a song from the animated film Les Triplettes de Belleville (2003). Its music was composed by Benoît Charest and its lyrics written by Sylvain Chomet. It was nominated for the Academy Award for Best Song. The vocals are performed by Béatrice Bonifassi.

Belleville Rendez-vous is also the name given to the film Les Triplettes de Belleville in its UK release.

Sweet and Low Down

Tribute by Woody Allen – ‘Sweet and Low Down‘

A comedic biopic focused on the life of fictional jazz guitarist Emmet Ray. Ray was an irresponsible, free-spending, arrogant, obnoxious, alcohol-abusing, miserable human being, who was also arguably the best guitarist in the world. We follow Ray’s life: bouts of getting drunk, his bizarre hobbies of shooting rats and watching passing trains, his dreams of fame and fortune, his strange obsession with the better-known guitarist Django Reinhardt, and of course, playing his beautiful music.  The Guitarist who dubbed and taught Sean Penn was Howard Alden

Howard Alden: normally  a 7 string guitar player was restricted to a 6 string for the recording of the S & L Soundtrack and he really missed that extra string while laying down the tracks. 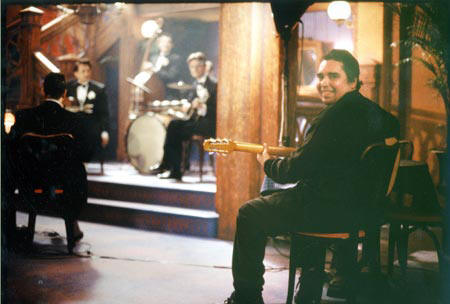 Howard Alden – Guitarist Howard Alden guitar solos from the Woody Allen film “Sweet and Low Down” based on fictional Emmett Ray’s life in the 30’s:

The guitar playing in the movie is actually by Howard Alden. You will want to own the soundtrack. Alden taught Sean Penn to play the guitar, in lessons so successful that Allen‘s camera never has to cheat:   We hear Emmet Ray and we see Emmett Ray‘s fingers, and there is never reason to doubt that Penn is actually playing the guitar.
Howard Alden belongs to a small, elite group of the very best jazz guitarists in the world.” –– Johnny Smith

Howard Alden – See you in my Dreams

The Script Biography of Emmet Ray
If you are a student of jazz history, you are aware that Emmet Ray — the subject of Woody Allens “Sweet and Low Down” — really existed.  Not only did he exist, Emmet resembled many of the jazz musicians of the 1940s. At one point in his career he lived off the money earned by a couple of prostitutes, a practice not unheard of in jazz circles beginning with Buddy Bolden and Jelly Roll Morton. However, these jazz musicians prefer the term “manager” to the phrase pimp. Like many jazz legends, Emmet was an anti-hero, but his guitar playing — makes up for his multitude of sins.

Emmet was also a traveller who not only toured America but has played extensively in Europe. The guitarist lived at a time when jazzmen first traversed the country, spreading consciousness of jazz even to American audiences who were beyond the modest reach of radio and recordings. This original American art form not only spread across the country but to Europe in the 20s and 30s. The way was paved by such men as Louis Armstrong and Duke Ellington who were welcomed enthusiastically when they appeared on the other side of the Atlantic Armstrong in 1932 and Ellington in 1933.

The audience for these giant talents included foreign musicians who modelled themselves after the American originators. Many Europeans played on a high level but only one became a major influence on American jazzmen — the gypsy guitarist, Django Reinhardt.

In Paris, Reinhardt and violinist Stephan Grappelli founded the Quintet of the Hot Club of France in 1934. Bringing his romantic, bittersweet gypsy ethos to the American jazz with which he had fallen in love, Django created an original sound and style.  Though little is known about the life of Emmet Ray (few photographs and recordings exist today), the Woody Allen film attempted quite enthusiastically to capture the spirit of Emmet Ray — and that of the crazy world of jazz — on celluloid forever.