Stanley (Dick) Charles Knight was born 22nd March 1907. Dick started as an amateur player and began to get proficient on the banjo and clarinet while working as a skilled machinist. During Knight’s formative years in the 1930s he worked for Lagonda, the motor vehicle manufacturer, whilst working here Dick lost the tips of his fingers on his left hand so he was unable to play the guitar.  So he thought,  If can’t play the guitar anymore then I will make them.  He promptly applied his formidable skills. 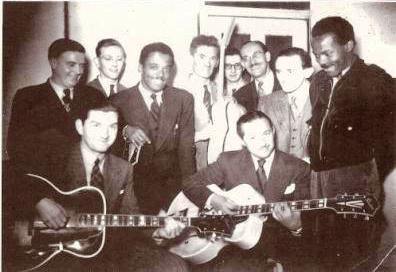 Jack Llewellyn and Ivor Mairants testing a new Van Straten Symphony Guitar made by Dick Knight.
Behind them, from left to right, are Jo Van Straten, Joe Deniz (gr) headstock in hand, Dick Knight, Dick Sadleir and Lauderic Caton.  That could be Billy Bell looking in with the glasses centre rear. 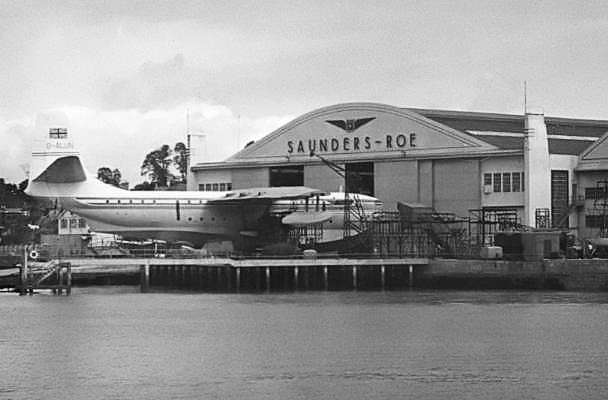 Dick worked with Saunders Row during the War building wooden planes (Flying Boats), boats and pontoons. He was the Foreman of a large woodworking Mill at Colombine IOW  Eventually, he was approached by Joe Van Straten,  Manager of Selmers, Charing Cross Road.  Joe had the money and Dick had the know how.  So they formed a Company called Straten Guitars which ran from 1946 – 48, with difficulties getting supplies – like wood and machine parts – the Company was doomed from the start.  Dick went through a period of illness – pneumonia, etc.  When the Company closed Dick continued to work with Ben and Lew Davis at Selmers and he stayed there until his wife became ill – this meant he had to get a job locally so he could be at home with his girls.  So he got a job just around the corner, with West Surrey Industries as a Mill Foreman. As well as being on call for the family, in his spare time he started making guitars in the shed at the bottom of the garden. He carried this on until his wife Ivy died of cancer in 1963. At that point, he stopped working for Surrey Industries and started making Guitars full time.

Dick Knight was justly renowned for his voluptuous Big Band-era Archtops.  His son-in-law Gordon Wells, together with his son Robert, has carried on his tradition with outstanding Guitars such as the Knight ‘Deco’ model.  Top of fine-grained Sitka Spruce, back and sides of select figured Sycamore, Ebony Fingerboard with Mother-of-pearl inlays and all brass hardware by Knight Guitars. An exceptional Instrument.

In late 1964 Gordon Wells met Dick Knight when the latter repaired a Guitar for him. A year later Gordon and Dick‘s daughter were romantically involved.  Gordon was working part time and he joined with Dick building Guitars full time in January 1967.  Dick and Gordon worked together from then until 1986 when Dick had a heart attack. In that period to 1986 Dick made Guitars and Gordon did all the repair work.

After 1986 Gordon was now taking guitar making forward. Dick was no longer making Guitars although he was still involved in the Business.  Gordon began working on his own Marque.  Robbie his son was interested in Electronics and lost his job, in 1991 he asked his dad if he could come along to sweep the Workshop and he’s been there ever since.

Knight-Guitars work for leading Agencies and Musicians from all over the world. Knight are known for their high standards in Professional repairs of Instruments. Their reputation is high and a word-of-mouth operates in the industry. You name them and Knight Guitars have probably worked for them.