After the initial 1934 success of QHCF they continued to Record & Tour Europe. They started recording material composed by Django himself and some American Standards.  Django did not know how to read & write Music and only later in life taught himself how to read & write limited French.  They also played & recorded with expatriate and visiting American Musicians such as Coleman Hawkins, Benny Carter, Rex Stewart and Louis Armstrong.

When WWII broke the Quintet was touring England.  Django and the others returned to Paris but Grappelli stayed in England thus ending the 1st incarnation of the Quintette du Hot Club de France. Clarinettist Hubert Rostaing was hired to replace Grappelli. Django somehow survived the dark years of Nazi occupation when many of his people perished in concentration camps. Jazz was banned under Hitler despite enthusiasts in his forces. Django was only allowed to play his music because of the aid of a Luftwaffe Officer – named Dr Jazz who loved jazz and admired his skill.  After the War, he rejoined Grappelli and they continued to Tour Europe.  Django visited the US alone in 1946 at the invitation of Duke Ellington. He stayed in New York for a while but in 1948 returned to France and then played mostly Amplified Guitar except on his latter-day masterpiece Djangology which he recorded in Rome together with Grappelli and a Trio of Italian musicians. 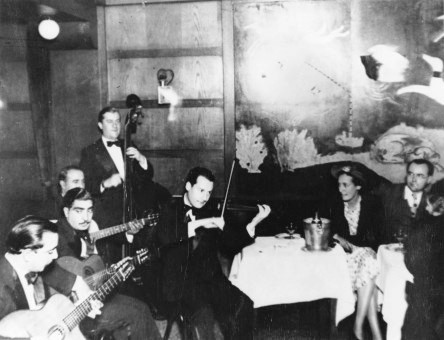 In 1951 he retired to Samois sur Seine, near Fontainebleau France. He lived there until 16th May 1953, when, he collapsed outside his House and was declared dead from a Brain Haemorrhage on arrival at the Hospital in Fontainebleau.