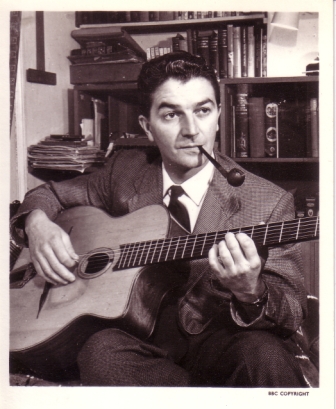 Ken Sykora an early addition to this series of UK Pioneers, is the subject of a feature-length documentary titled, The Man with the Jazz Guitar due for release in 2012.  You can contribute to complete the Five Foot Films production and help shine a light on this pioneering Jazz Guitarist luminary.

They need all the help we can get in spreading the word about Ken and the Film. They have just launched their campaign to raise funds to pay for the music rights, so we can keep as many of Ken’s performances of the great Jazz Classics on Film as possible. It’s a fair target they need to reach, but if if you can spread the word widely and lots of people give just a few quid, we can get the film out and everyone will be able to fully enjoy Ken’s Musical contribution! 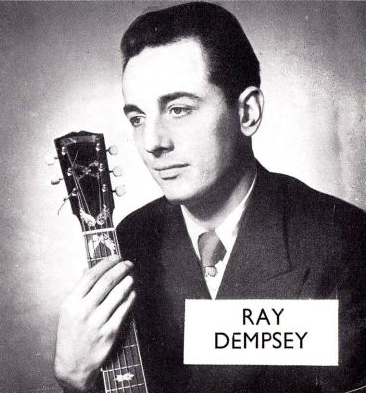 They aim to have a Ken Sykora ‘Radio Station’ broadcasting from the Film Website and they will try to get the BBC to allow them to ‘air’ some of Ken’s Programmes. They have 3 complete Guitar Clubs and look forward to making them fully available. They also interviewed Ray Dempsey 2 years ago as part of their research. He was living in London and in very good form. They spent the evening chatting with him about his recollections of Ken, Guitar Club and of course Django (Ray’s another huge fan).

Also spoke with Jack Toogood around the same time, who recalled the Stringalong years. Indeed, a number of the performances of Ken that we’ve extracted have come from Stringalong.  He did so much to bring the instrument to the fore at a time when there was little else but George Formby Ukelele’s for the masses on the British Music Shops.

Ken Sykora – influential host of Guitar Club who was on a number of occasions voted the winner, ‘musician of the year’ by readers of the Melody Maker.  Seen here with a Vibesman Reg Wale or Jimmy Macmillan at his back and picking his amplified acoustic Macca on his lap and smoking his ever-present Briar pipe..

Music remained an all-consuming passion for Sykora. He led own Band in the 1950s, performing with Ted Heath at the London Palladium and with Geraldo at the old Stoll Theatre, Kingsway, London (demolished 1958) and was voted Britain’s Top Guitarist 5 years running in Melody Maker’s Readers’ Polls.  Music led him into Broadcasting, and involvement in the creation of a wide range of popular Radio Programmes. First he presented and played on Jazz Club and At the Jazz Band Ball. He devised, presented and performed on the Guitar Club & Stringalong series. Other Programmes with the Sykora stamp included Those Record Years, Album Time, LP Parade, Big Band Sound, and Radio Three’s Jazz Digest. In his final years he liked nothing better than to watch the ever-changing waters of Loch Long lap on the foreshore opposite his house at Blairmore, and to soak up the music of Django Reinhardt and other Guitarists.

Sykora’s talents also extended to Journalism. He wrote for Magazines, in the Music Press and also for educational, travel, and food & wine publications. He also composed music for Films and for his own Band.  He produced regular weekly Music Shows for Radio Clyde from its inception in 1974, Serendipity with Sykora

The urbane figure of Ken Sykora was an inspiration to 1,000s of amateur Guitarists, through his Rradio Programmes Guitar Club & Stringalong. An accomplished Guitarist and a relaxed Presenter, he made even the most complex aspects of playing the Guitar seem accessible.  His devoted listeners included the young Paul McCartney.

Sykora did not merely proselytise for the Guitar. He was a natural Broadcaster, whose output included award-winning Programmes about food & drink and Scottish place-names. Although he had a successful TV career, his real talent was for Radio, and for bringing his subjects alive at the microphone.  Sykora, who was born in London in 1923, read geography at Cambridge & Social Sciences at the London School of Economics. He captained the London University football team and was President of the Union.

After War service in the Far East as an Intelligence Officer with the Chindits, he returned to the LSE as a Lecturer, also teaching at the College for Distributive Trades. In the meantime, he had developed his talent as a Guitarist, and in the early 1950s, this was to become the main Force in his life. Sykora 1st recorded at the age of 19, with a Jam Session Band led by the Jazz Saxophonists Harry Hayes & Buddy Featherstonhaugh. He was to continue to move in such fast company, recording in 1956 with the celebrated Jazz Today Unit, alongside George Chisholm & Dave Shepherd.

From the late 1940s, he led his own Band, playing in a convincing Jazz style, and appearing in Concert opposite several of the leading Bands, including those led by Ted Heath & Geraldo.  Melody Maker also featured him on its cover when he married Helen Grant, a well-known Cabaret Singer (an earlier marriage had ended in divorce). Grant had met him on a blind date and thought him a rather boring academic until she heard him sit in as a Guitarist with the House Band.  Sykora’s days as a full-time Guitarist were numbered. Although he continued to play & record, notably with Bob Cort in the emerging Skiffle movement, he was increasingly busy as a BBC Radio Presenter. At first, this was a direct consequence of his musical work, and he hosted Jazz Club and then At the Jazz Band Ball.

However, Sykora soon realised that there were other ways to use his talents, and he devised and presented his 2 long-running Guitar Series, before moving on to present Roundabout (a music and chat show for the Light Programme) and Be My Guest, in which celebrities talked about their lives. Other Radio Work included Album Time, Big Band Sound, LP Parade, Those Record Years & Jazz Digest.

By now living with his family in East Anglia, Sykora also took to the outdoor life, presenting a Radio series on the joys of Sailing.  Radio also allowed him to discover the story of his Family.  Although he knew his mother was Swiss, it was only as a result of appearing with Roy Plomley on Desert Island Discs that he found that she was the stepdaughter of a Count and that she had eloped to London with his father, a Czech Cavalry Officer. An anonymous letter telling him this turned out to be from his elder sister Phyllis.  Ken’s parents had eloped and in those days the subject was still sensitive.  As a child growing up, such things were not spoken of.  The families had long since reconciled. Ken holidayed in Switzerland as a child and spoke warmly of his mothers Village. 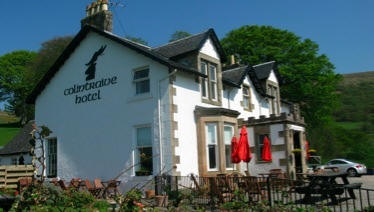 At the start of the 1970s, he presented 2 staple strands of Radio that continue to the present day, You and Yours and Start the Week. However, he and his wife made a radical change in career and moved to Scotland to run the Colintraive Hotel on the Kyles of Bute.  After some years, they sold the Business, but Sykora now became a fixture on the Scottish media scene, working for the BBC Scottish Service (later Radio Scotland) and for Radio Clyde, where he became head of features.  In the late 1970s, he found his final niche as a Broadcaster on the Radio Scotland food & drink show Eater’s Digest, for which he won several prizes including a Glenfiddich Award and a “Pater” from Australia. The show was later syndicated to BBC Radio 5.

Sykora’s wife Helen predeceased him in 1997. the daughter of Hannah Grant, Scotland’s 1st woman chef. In the 1970s when they ran the Colintraive Hotel, Sykora enjoyed being the chef, using local produce such as hare, venison and rabbit, and earning himself the nickname ‘The Big Soup’ because of his legendary Powsowdie soup made with singed sheep’s heads.  He is survived by his sons Duncan, Dougal and his daughter Alison. 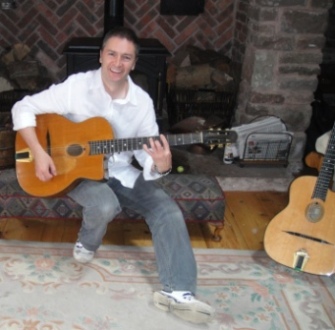 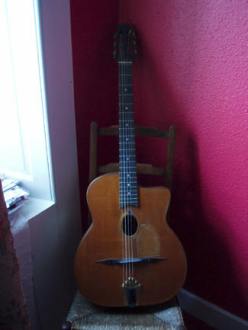 Duncan Sykora with Dad’s Selmer Maccaferri – Duncan has played the Guitar since the age of 8, following in the footsteps of his father Ken Sykora – who was top Guitarist in the Melody Maker polls for 5 years running. He has played in various Bands including Mad Jacks Travelling Circus, The Steve Maddocks Band and Pride with whom he appeared on BBC & ITV. He teaches Guitar for a local College and also privately. 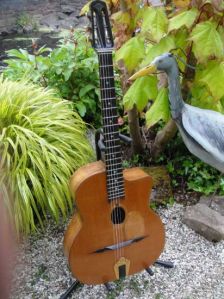 P V Chester – Duncan Sykora was delighted with the material on his Ken Sykora that you’ve posted. I had the added pleasure of performing a few numbers on his Dad’s Selmer, which had been played by Django himself! Ken had met and played alongside Django.

This Guitar has a plastic scratch-plate shadow and may also have belonged to Bert Niblett (Club Django) who fitted these plastic guards to avoid damage to the soundboard. He also new Ken well.  Bert was a bit of Luthier making Bertaferri’s and fitted similar Scratchplates which were exclusive to him.
Ken Sykora – Portrait of Django 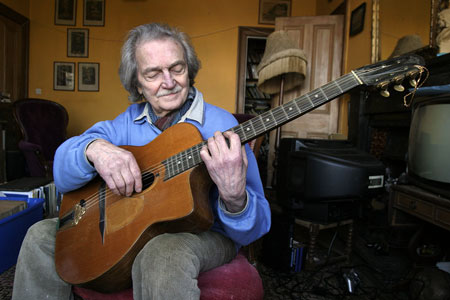 Ken Sykora, guitarist and broadcaster, was born on April 13, 1923.
He died on March 7, 2006, aged 82. while listening to the music of Django’s Nuages.
The Man with the Jazz Guitar – Website
Bedfordshire Clanger Theme ‘Little Black Dog’ with Ike Isaacs on Lead and Ken Sykora on Rhythm.
Ken’s Profile 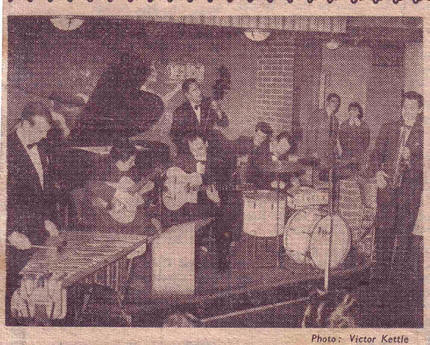 The Ken Sykora Six. It was described as a ‘novel line-up’ and also featured Ray Dempsey on guitar, Bruce Turner, alto, Denny Purssord, guitar, Jimmy MacMillan, vibes, George Jennings, bass and Pete Harris, drums. It became the only resident band at The Bandbox, based on the premises of the Café Anglais in Leicester Square, London. They performed in most of the leading jazz clubs in and around London, although unfortunately, their style of music was going out of fashion. Skiffle was increasing in popularity and jazz music was also taking a different route. The band continued to play throughout 1954, the highlight an appearance on BBC radio in 1954 with Stephane Grappelli.  Their last work together as a band was for the film The Passing Stranger, scored by Ken Sykora

Thanks for the mention we are keen to make sure his music and playing remain alive, it’s so lovely to hear and see him on the net.   He pretty much worked with everyone you mentioned on the UK Jazz  Pioneers page!  Dads 1958 tune “Little Black Dog” dad plays rhythm, Ike Isaacs on lead guitar with the guitar club band is the theme tune for the new short British Film The Bedfordshire Clanger from Five Feet Films, showing at Cannes  Film Festival this year  (2007).  Very kind regards  – Alison Sykora – Duncan Sykora (Ken’s Son) is also a Guitarist. Bedfordshire Clanger Theme ‘Little Black Dog’ with Ike Isaacs on Lead and Ken Sykora on Rhythm Guitar.
The Bedfordshire Clanger

The Bedfordshire clanger was originally the food of Farm Labourers. A Suet pudding with a Meat filling, portable cold or eaten hot on returning home. They were considered affordable, filling and very calorific. As the Pudding could be left simmering away all day, ready for the Family’s evening return, it suited an area where many of the women were employed outside the home in the 19thC.