Edward F Freeman learned to play Violin at the age of 12 and became a Professional Violinist in Pit Orchestras of Silent Movie Houses in England. While playing in Movie houses he took up the  Tenor Banjo. To better Master that Instrument, he travelled to the United States, where he played with Ricardo Giannoni in New York; with a Dance Orchestra in Baltimore, Maryland at the Summit Roadhouse near the Pimlico Racetrack; in a Harlem speakeasy; and in engagements with Billy Lustig & The Scranton Sirens.

During this period he found it necessary to abandon the Tenor Banjo in favour of the 6 String Guitar which was coming into favour. While convalescing from an illness in Baltimore he developed a method for adapting the Tenor Banjo Techniques to the Guitar, which later led to his development of a 4-String Tenor Guitar, the Eddie Freeman Special, using his new method
Eddie Freeman Special – Selmer Rhythm Guitar

He returned to London to play in the Harry Roy Orchestra at the London Pavilion. When noted Bandleader Al Collins heard of Eddie and listened to him play, Collins signed him up for his Orchestra at the Savoy Hotel in London. When Collins switched to the Berkeley Hotel in 1932, Freeman went with him. Freeman spent the War years in Belfast playing Trumpet and conducting a 7-piece Dixieland Combo in The Embassy Club in Fountain Street. After the War he played Trumpet in the Knightsbridge South American Club in London and doubled with Jazz Guitar in the Bag O’ NailsPub/Club, 9 Kingly Street, Soho (Now Miranda).
The Bag O’ Nails Club was in the Basement of 9 Kingly Street and was a well-known Music hangout of the 1930s.  A profile written about it just before WW2 said “100’s of well known Musicians have busked on its Rostrum. It is to the History of British Swing Music what Hampton Court is to the History of England. 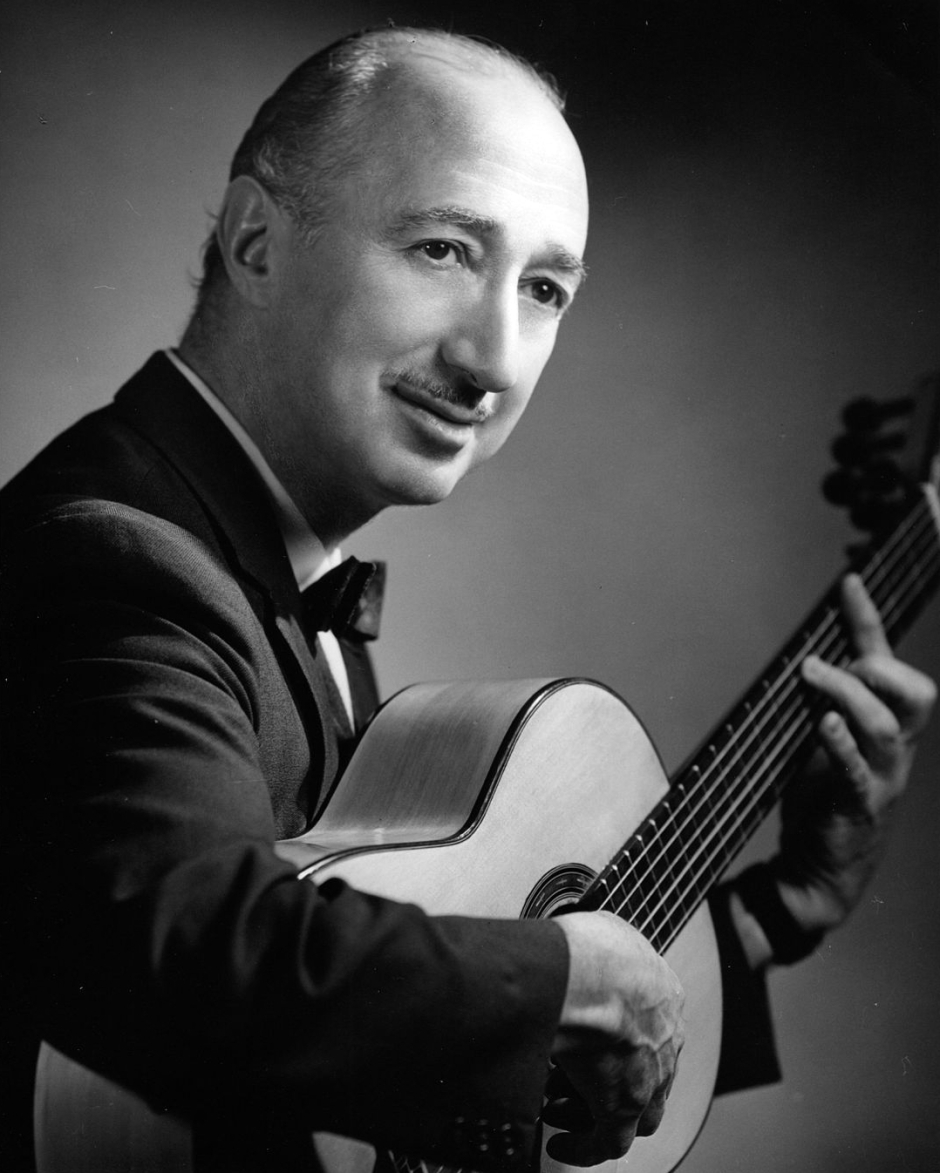 He moved with his Family to the United States in the early 50s settling 1st in Oceanside, California and supporting himself as a Piano Tuner. Inspired by Flamenco Music, which he 1st heard when working at the Savoy Hotel, he left his Family in California and travelled to Spain to discover its fundamentals. His search was interrupted when he decided to play Violin in the Palma de Majorca Symphony, but in Palma he met Guitarist Manolo Baron from whom he learned the basics of Flamenco.

He later formed a Flamenco Group, Los Tres de Sevilla, with 2 Dancers.  When he returned to the US he moved his Family to Cedar Springs, Dallas, Texas, where wrote, performed, transcribed & perfected his knowledge of Flamenco. He made accurate transcriptions of the finest Flamenco Guitarists: Ramon Montoya, Sabicas, Mario Escudero, Carlos Ramos, Esteban de Sanlucar, Nino Ricardo, and Paco de Lucia.

His earliest publication of a Flamenco Transcription was of a soleares by Esteban de Sanlucar in Issue number 19 of The Guitar Review in 1956, the same year in which he Registered his 1st US Copyrights for his Transcriptions. He subsequently published a collection of Transcriptions of Guitar Solos (Guajiras, Petenera & Malaguena) by Carlos Ramos (1967) through Charles H Hansen Company. 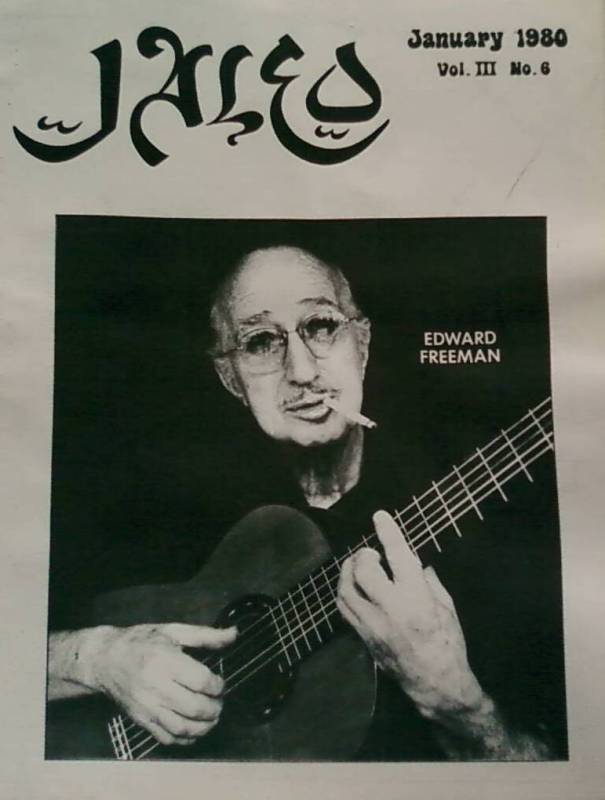 Picture of ‘Flamenco’ Edward Freeman on the Jaleo Flamenco Magazine Cover Jan 1980
Jaleo was a great magazine that covered the Flamenco scene with correspondents from all over the world. There were interviews, reviews, articles, and more. Jaleo was a product of its time: 1978-1990.

It was inspired by an earlier effort, in the 1960s, by Morre & Estela Zatania in New York. Their FISL Newsletter was very Folksy, with handset type, but had excellent articles. We started very crudely with Jaleo, cutting and pasting typewritten text, and taking photos out to be screened into dots before gluing them in under headings made from press-on letters. By the end, we were laying it out on an early Macintosh Computer. Jaleo was followed by Greg Case’s Journal of Flamenco Artistry (Los Angeles) and, finally, the superb and polished Flamenco International Magazine, out of London. All of those efforts were doomed to failure by one glaring fact: Flamencos don’t read.  It’s not really a loss that Jaleo is no longer available. Much of the content is quite dated. At least half of it dealt with local parties & performances in California. Another quarter was translations of current events in Spain. That leaves 25% of general information that was often quite good.

Paco Sevilla – I have always written. Twelve years of Publishing Jaleo magazine gave me a lot of practice in writing and also helped me to amass a great deal of research material. An amazing amount of the information found in my books came from those magazines. I have always been very analytical.  Teaching guitarists, singers & dancers for so many years forced me to get to the essentials of technique & artistic communication. 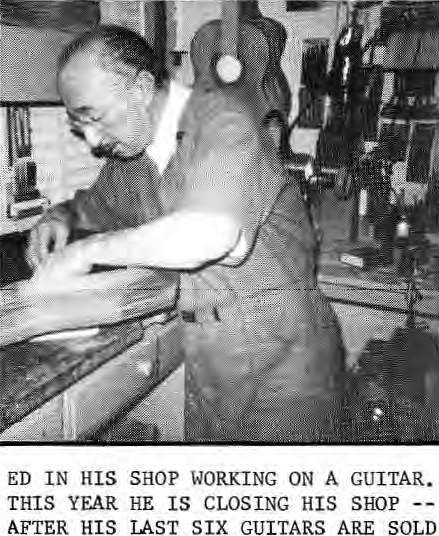