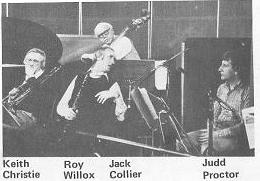 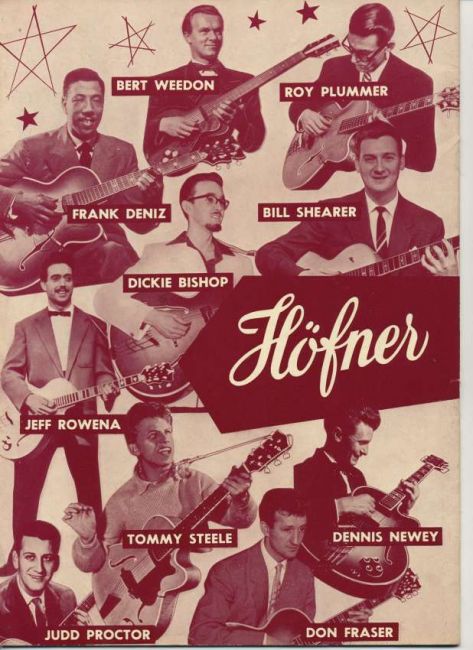 The older guys were Eric Ford, Brian Dayley, Ernie Sheer, Judd Proctor, Jack Llewelyn, Ike Isaacs, Roland Shaw, Dave Goldberg, and to many more to name. All of the older guys had their Gibson L5‘s or Epiphone Emperor‘s, De Angelico‘s, Guild‘s, and other exotic Guitars. All of them full-bodied with a separate pick-up attached to the instrument. Vick Flick had a Fender Stratocaster, possibly the 1st solid-body guitar on the Session scene. 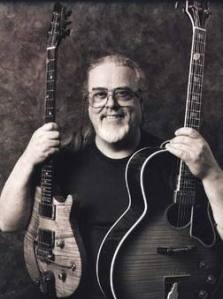 Eric Ford was a mentor to Big Jim Sullivan from the start. Every time he was on a Session with Eric he would help him with either reading or how to behave. We both played in a Group with pianist Reg Guest. It was called the ‘Nashville 5‘. We were on a Radio Program called ‘Cool Spot‘ every week and we did a lot of instrumentals. Jim played a lot of Chet Atkins arrangements. Reg did the backings for these pieces. Eric played Gibson ES-335 on these Sessions but later he bought a 6 string Bass Guitar. It was the time of the clicky Bass lines and Eric would enhance the main Bass laid down by Alan Weighle who was possibly the 1st Electric Bassist in England. 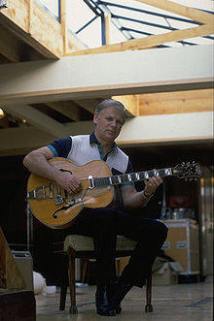 Vick Flick – Guitarist
Victor Harold Flick (born 14th May 1937 in Hill Crescent, Worcester Park, Surrey) is a Guitarist most famous for playing the riff in the “James Bond Theme“. Before that, he also played the Guitar riff in the theme tune of the popular early 1960s TV show Juke Box Jury. As a member of The John Barry Seven, he appeared on every episode of BBC TV’s Drumbeat during 1959.

Apart from his early 1960s work as the distinctive lead guitarist in the The John Barry 7, Flick was a much in demand Session player and featured on many early Sixties UK pop records.

Vic Flick Plays the James Bond Theme on the Paragon 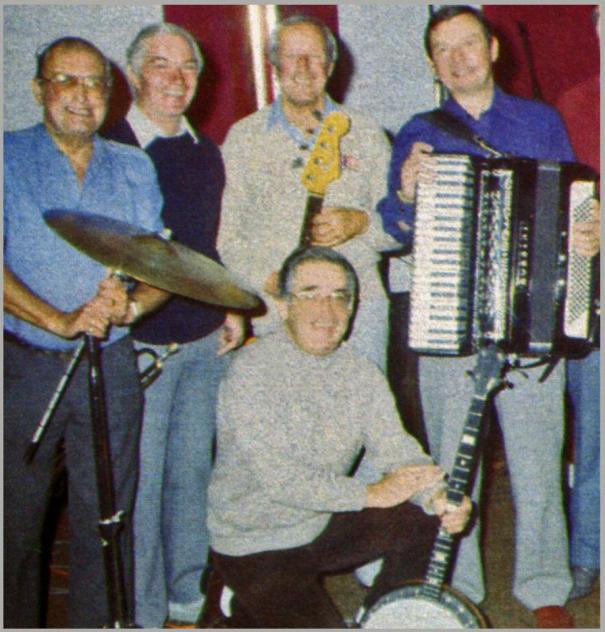 Move It Musician Ernie Shear (1987) kneeling – as pictured when a Banjo and Guitar playing Session member of Jack Emblow’s Riverboat Collection – as on the sleeve of the LP “Alabamy Bound”: Maestro MTS16

For Move It, he played, a beautiful blonde Hofner Archtop Guitar with a DeArmond pick-up near the Bridge. It has been suggested that he used a Fender amp although I doubt that; it seems too early. It’s more likely that he would have used a Selmer or some such.  The “suggestion” that Ernie used a Fender Deluxe Amplifier was made by Ernie himself, in an Interview in the mid-1990s. That interview was eventually used by “Guitarist” Magazine.  “Ernie played an absolutely wonderful introduction,” confirms Malcolm Addey. “He was one of those Guys who would play whatever was required without getting uptight, and so he just turned up his EQ and let it rip.  It came out really great, and that’s what got everybody’s attention. For his part, Cliff liked to play while he was singing, so Norrie Paramor allowed him to hold on to his Guitar, and after a false start we completed the song in a couple of takes.  There were no edits whatsoever – we did very few edits in the pop field, and those were usually only on an LP, which might be a little more complex.

“Shear and bassist Frank Clarke were older men who by their looks would not have been imagined as Rock ‘n’ Roll Musicians. Clarke – who played the Double bass – was a very experienced Session Musician: physically he was a tall, good-looking, well dressed and muscularly looking man.  Guitarist Ernie Shear was a short, stocky, dark and wavy haired Scotsman. A horn-rimmed spectacle wearer by 1958 – Shear had moved to London when aged just 15 years and had eventually found work in the Oscar Rabin Band

Says Ian Samwell who wrote Move It as the then ‘Drifters’ Guitarist quotes – On ‘Move It’ Ernie Shear played a blonde Hofner Guitar with a DeArmond pick-up near the Bridge. It’s more likely that he would have used a Selmer or some such. In the Studio’s Recording Control Room, there were 2 Engineers, Malcolm Addey & Peter Brown. They were both formally dressed but Norrie Paramor was resplendent in a Hawaiian shirt & Bermuda shorts! He had recently returned from his summer holidays in Tangier. Previously we had only seen him sitting behind a desk at his Office appearing and acting every inch the Businessman as he peered over his rimless glasses. I believe his title at the time was Recording Manager rather than Producer. 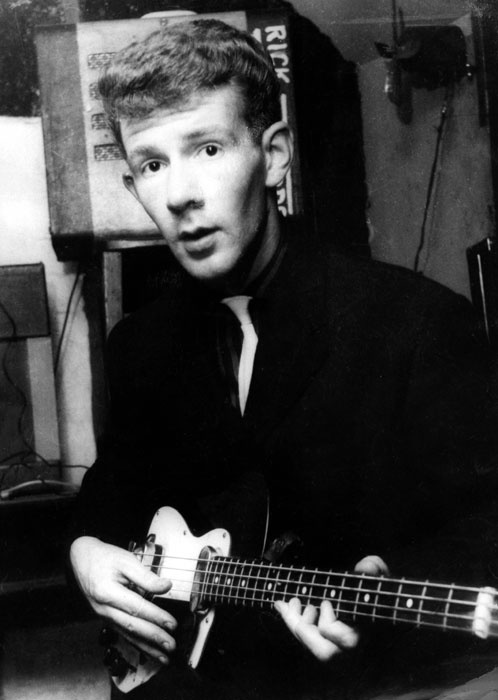 The Session: Immediately at the onset of the 7pm Recording Session, because no demonstration recording had been made of the song and as it had not been annotated as a sheet chart” The Drifters” performed it for Clarke & Shear.  Probably The Drifters had not appreciated quite how or even if their Recording Session would be augmented by other Musicians! As it was Ian Samwell, being as Professional as he could be, simply presented Shear with the song’s Lyrics which the Session man duly placed on his Music stand.  After the introduction and initial practices of the song, Paramor very quickly decided that Shear’s Guitar playing, his instrument & equipment, were better than Samwell’s and that it would be necessary that he perform the song’s somewhat unusual & technically demanding quaver rest introduction – which Shear had readily mastered. It was further decided that Shear would play the 1st 2 bars of Rhythm. Following those, Samwell would join in, so allowing Shear to perform Guitar embellishments – ie the “frills”. Thereafter ‘Move It‘ was recorded in just 2 takes and although there was a single false start the session was rapidly completed – taking little more than 20 mins from start to finish.

The Guitar of Ernie Shear is the most compelling component of ‘Move It‘ and that Ernie Shear who had been asked to perform his Guitar parts in an inventive manner and intuitive Rock ‘n’ Roll manner did just that and something more. His Guitar part improvisation, which was uniquely exciting to many Rock ‘n’ Roll record buyers, made the otherwise unremarkable “Move It” a British Rock ‘n’ Roll Classic!

Ian Samwell remembered: ” There were no photographers on hand that day, (a Sunday evening after 7pm) but from left to right such a picture would have shown myself, Ernie Shear, Frank Clarke & Terry Smart. Cliff stood just a little in front of us facing the Control Room.  Because he had had some difficulty singing without playing, Paramor had allowed him to hold on to his Guitar. After the session, I remember feeling strangely deflated. There was nothing to do but go home. Same thing for Cliff, Terry & Johnny. They to Cheshunt and me to London Colney.

Samwell later discovered the band America and produced their 1st Album, America in 1972. Samwell is also credited with persuading their Guitarist Dewey Bunnell, to change the name of “Desert Song” to “A Horse With No Name“, which became an International Chart success. In 1974.

I remember a Library Book a few years back called ‘18 Watts!‘, which included much early UK Guitar accessories such as the Watkins Dominator/Watkins Copycat etc and mentioned many Session men. Judd Procter, Roy Plummer, Terry Walsh, Denny Wright &  Eric Shear as the Guy who played the intro to ‘Move It’ and snookered me for ages because of the odd 3 quavers rest at the off.   J

Alan Parker (born 26th August 1944, in Matlock Derbyshire a Guitarist and Composer. Parker was trained by Julian Bream London’s Royal Academy of Music.  Parker was a successful Session Guitarist, starting in the late 1960‘s, who also played with Blue Mink, The Congregation and Collective Consciousness Society.  Much of Parker’s session work has gone un-credited but he has been named as the electric guitarist on Donovan’s “Hurdy Gurdy Man”, The Walker Brothers’ “No Regrets”, David Bowie’s Diamond Dogs album, Mike Batt’s “The Ride to Agadir”, and the Top of the Pops theme music version of “Whole Lotta Love”.  Parker is now a composer for film and TV including ITN’s News At Ten and BBC’s Coast

Wout Steenhuis
Made his Escape from the Nazi’s en route to Execution. In May 1945 during fighting with Germans, he was shot in the right arm. After a few operations, the arm was once again suitable for playing the Guitar, which he did as a member of the Dutch Swing College.  He came to England in 1948 followed shortly after by his fiance whom he married later that year. Encouraged by his wife he sent some of his recordings to the BBC and very soon he made his debut broadcast in ‘Guitar Club‘.  The Kontikis – a name given to his own backing of multi-tracked instruments. On later albums however, due to the expansion of Orchestration, it became a lengthy and laborious job to play all the instruments himself so the Kontikis were made up of session musicians such as Herbie Flowers / Tony Campo (bass), Alan Parker / Dick Abel (guitar) and Clem Cattini / Barry Morgan (drums).  Often backed by a group of musicians in the shape of Dick Abel (lead/12 string guitar), Colin Green (rhythm guitar), Dave Richmond (bass), Cliff Hall (keyboards), Barry Morgan (drums), Frank Ricotti (tuned percussion/L.A. Percussion), Keith Nelson (banjo), Harry Pitch and Judd Lander (harmonica) plus vocal backing from Norma Winstone, Jean Gilbert and Tracy Miller.  Wout Steenhuis passed away on Tuesday 9th July 1985.