– but was it  Lincoln Nebraska for that Pla Mor Ballroom – conflicting info out there as there was another Pla Mor Ballroom in Kansas City which had a lower structural profile.  Some local insight is needed to clarify the following images.

Or was it
On Tour in the Mid-west &/ Carnegie Hall, New York City –
Friday 15th November 1946 Duke Ellington and his Orchestra play a One-nighter at the Turnpike Ballroom and also known as the Turnpike Casino in Lincoln, Nebraska.

Lincoln show – Lincoln had 6 Big Ballrooms and one was operated by Will Wittig: the “PLA-MOR” (the last one and still continues on today). After Duke Ellington’s passage, Wittig declared that he will no more book big names for Concerts as he only grossed $3,700 when Duke played there.

On the evening of 24th November 1927, the Ballroom opened at 3142 Main Street to a crowd of 4,100 who revelled at its unprecedented size & modern style. The facility followed in the footsteps of the Roseland Ballroom in New York, the Graystone Ballroom in Detroit, and the Aragon Ballroom in Chicago at the height of the Jazz Age of the 1920s. 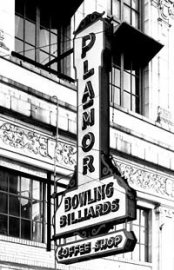 On opening night, the Ballroom’s multi-colored electric lighting dazzled 1,000s of Dancing Patrons who were serenaded by the Jean Goldkette Orchestra. Dancers found an extra bounce in their step because of the 7,000 springs beneath the wooden floor that flexed up to 0.25 of an inch. Famous Jazz Musicians appearing at the Ballroom in the subsequent 2 decades included Tommy & Jimmy Dorsey, Bix Beiderbecke, Frankie Trumbauer, Joe Venuti, Glenn Gray, Vincent Lopez, Larry Clinton, Stan Kenton & Ella Fitzgerald.

Another Operator of the same area that booked Duke for the Kansas City Concerts said that Duke played twice grossing $3,800 for a Concert (with Django) but he added that he grossed $5,600 the following day for Dance with the same Orchestra (probably without Django).  The kids wanted to Dance in front of the Band not sit.  The lack of Radio promotion was one of the reasons why the Concerts were not crowded, in the same area (Des Moines) the Tommy Dorsey Orchestra netted $9,500 with a good pre-advertising through Radio &  Newspapers. 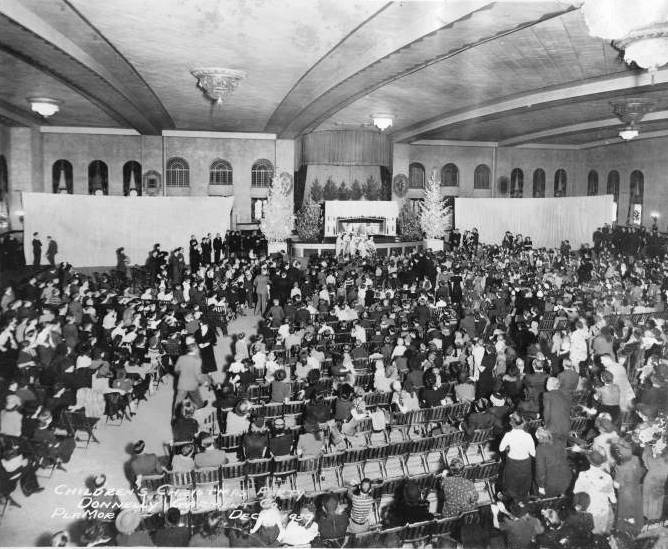 Located at Linwood & Main, the Pla-Mor Ballroom was part of an Entertainment Complex which included a Hockey Arena, Swimming Pool, Bowling Alleys, a Roller Skating Rink and a Baseball Diamond. Known as the “Million Dollar Ballroom,” the Pla-Mor opened Thanksgiving, 23rd November 1927, to the Music of the 16-piece Jean Goldkette Orchestra.  The Pla-Mor was lushly appointed with carpets & velour drapes. It boasted a 14,000-sq-ft, spring-loaded Dance Floor that could accommodate 3,000 Dancers.

Django at the Pla Mor with Gibson ES-300

The Pla-Mor featured legendary Artists such as Duke Ellington with Django Reinhardt and the best known Radio & Recording Bands including Glen Gray, Jan Garber, Jimmie Lunceford, George E Lee, Count Basie & Andy Kirk. Legend has it that Hoagy Carmichael introduced “Stardust” while a Member of the Pla-Mor’s House Band.  The Pla-Mor maintained its large crowds until changing social mores lessened the attraction of Ballroom entertainment and suburbanisation in the 1940s began to draw population from the heart of the City. The Ballroom ceased business in 1951, and the other attractions closed in later years. In 1972, the building was razed to make way for a Car Dealership.

This picture is claimed as Paris 1945 but more likely in the USA 1946 clearly Django holding with the same Gibson ES-300 Guitar obtained by William Morris Agency from Gibson probably on Hire.  Is that an easel with Django’s painting of a reclining female?  Likely taken at the Hudson Hotel NYC – with female model perhaps

The KC Pla-Mor Ballroom was considered for Blacklisting by the Musicians Union for a ‘Racist’ attack on Cab Calloway, who was attempting to enter the Ballroom to visit his buddy, Lionel Hampton. The door Ticket Taker was a KC off-duty Policeman, and refused to admit him and his Buddy because, it was ‘whites-only‘.  Even though, Cab told him who he was and that he was there at the invitation from Lionel.  The disagreement gave way to pushing, shoving, cussing & eventually Cab was Pistol whipped and arrested.  I did find an article on that event, but not much on Django’s visit except the Ad for the 17th November 1946 date, and the lone review which did not mention ‘Diango‘. (That’s the spelling used in the both Ads.)  The Pla-Mor closed after one last Dance on 14th June 1957.  The Pla-Mor was then converted into the 7th largest Bowling Alley in the nation. The Bowling Alley closed in 1966. In 1970 the building became Freedom Palace, a Rock Venue that featured national touring acts including the Who & Canned Heat. The Pla-Mor was demolished 31st March 1972

Well, I’ve tried to find the answer, as it is confusing, but Duke & Django actually played both Cities in 1946.  The Pictures above are from the Kansas City Pla-Mor Ballroom.  Living in Kansas City for most of my life, I can confirm that as fact.  In fact I lived about 2 blocks away.  In the ’70s before it was called ‘Freedom Palace’, and a lot of Rock Acts of the day played there as well.  I saw BB King open for The Who.  Of course, by that time, it was far from it’s glory days.  The Pla-Mor in Lincoln was not very helpful in getting info about their history.  Maybe, no one saved anything from those years.  Still, if I get up that way, I’ll see what I can find in the Library Archives.  Somewhere in my research files, I have an Ad for the Concert that appeared in the Kansas City Star for that date.  I’ll see if I can find it and scan it, if you’re interested.  Thanks for your Web info, enjoying it.- Phil ‘JazzDawg’