The Emperor The guitar held by Jack in the 1936 photograph above with his brother Charles is believed to be an Epiphone Triumph, (or more likely the Epi Tudor} but Jack’s instrument of choice was indeed the Epiphone Emperor.  Jack is playing his Emperor in the 1938 photograph taken in the broadcasting studio.  His preference for the Emperor was certainly not shared by his friend Reinhardt.  Jack told of showing the Emperor to Reinhardt in his hotel room.  Reinhardt tried a chord or two and then threw it back across the room to Jack.   The guitar which Reinhardt favoured, and which remains closely associated with his name, is the Selmer acoustic guitar commonly referred to as the Maccaferri.  This is the guitar played by Reinhardt and other members of the Quintette du Hot Club de France.  Jack indeed also owned a Maccaferri, and it seems probable that he acquired it at the time of his collaboration with Reinhardt.  Gordon Wells came up with the Triumph nomenclature for the above picture but specs are different.

The Triumph is essentially a Gibson L-7, or the poor-man’s Deluxe (or L-5)
16 3/8″ wide, 25.5″ scale, 3 ply binding on top and back, sunburst finish, single bound fingerboard, bound peghead, gold plated parts. The Hollywood is the Tenor version of the Truimph, and was available from 1934 to 1956 (renamed Truimph Tenor in 1937)
A recent BMG issue shows the actual guitar which is now owned by Brian Davis a former pupil of Jack’s dad. It originally belonged to Albert Harris who sold it to Jack Sr.

It was Jack’s love of the Epiphone Emperor instrument that gave rise to his nickname, in musical circles, of – ‘The Emperor’.

Jack’s Emperor was sold in the mid 70’s by Knight Guitars on Jack’s behalf to Clive Hicks, who is believed to have kept it until just a couple of years ago, when it was sold on EBay to a purchaser in the United States. 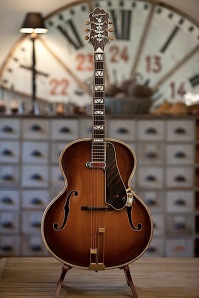 Greeting from Paris, – I read the interesting page on Jack Llewellyn and his Emperor. After a short while, the “US purchaser”  who had bought the Emperor from Clive Hicks‘ estate put the guitar back on eBay and I bought it from him. The guitar has been in my possession since 1998 I should think. I had some work done on it by one of my luthiers in order to replace the outer layer of binding that had deteriorated.  The electronics of the DeArmond pickup need some attention – but I have left them untouched for the moment.  As I like to play the guitar acoustically,  it is strung with 13-56 brass strings. It produces a very sweet tone – not as barking loud as some other Emperor’s I own have, but very balanced and “bouncy” which makes it suitable for solo work. A very interesting instrument, in a great playing condition.  Some recent pictures – check out the outrageously flamed maple: – Elie is a Lawyer and an amateur Jazz Guitarist.

It is the address-fob from the case of Jack’s Emperor that is still in the possession of Gordon Wells. 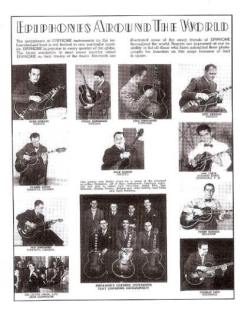 Page from Selmer catalogue of 1939 showing Jack (2nd from left in back row) with some of his contemporaries. Selmer were the importers of Epiphones in the UK.  Contemporaries included – George Elliott, Harry Pike, Ivor Mairants, George Fenton(?), Albert Harris, Sam Galslay(?), Sid Colin and Cyril Halliday

Jack in the Studio with Epi Emperor

Emperor Regent, Broadway and Triumph have the staggered Frequensator Tailpiece and the Guitar Jack holds above appears to be the Masterbilt Deluxe F hole archtop

Throughout the 1930s, the rivalry between Epiphone and Gibson would veer from friendly sparring to all-out warfare. Slighted by the introduction of the Masterbilts, and having emerged from its commercial slump at the start of the decade,

Gibson returned fire in 1934 by increasing the body width of its existing models and introducing the king-size Super 400 (named after its $400 price tag).

Not to be outdone, Epiphone replied the following year with the top-of-the-line Emperor, which raised the stakes with a slightly wider body and a provocative advertising campaign featuring a semi-naked woman making the Guitar look deceptively big.

In 1936, Epiphone struck again, increasing the size of its De Luxe, Broadway and Triumph models by an inch (making them 3/8″ wider than the Gibsons).

In 1935, the Epiphone Company introduced several new arch-top acoustic guitars and topped their line with the 18 3/8-inch Emperor model. This model was considered the flagship of the company’s Masterbuilt line, which was redesigned and expanded to meet the increasing popularity of the guitar during this period.

The acoustic arch-top version of the Emperor was discontinued around 1957, but in subsequent years the name has been used to name several electric models, such as the Emperor II, Emperor Regent, and Joe Pass Emperor. These instruments have very little in common with acoustic arch-top version that Freddie Green used. Under the ownership of Gibson, Epiphone offered a Japanese-made Emperor acoustic re-issue in limited quantities for a short time during the mid 1990‘s.

During the Big Band era of the forties, the Epiphone Archtops were considered by professionals to be the loudest percussive acoustic guitars, capable of rhythms rivalling the neighbouring horn section. Epiphone rarely made custom instruments and instead was known as a production-oriented company. Designed by Johnny Smith, the 1950 Epiphone Emperor Concert has an unusual trapezoid sound hole which makes it a powerfully smooth solo instrument. Johnny Smith prevailed on Epiphone to alter the standard Emperor model with three modifications: the trapezoid sound hole replaced the f-hole design; the parallel bracing pattern was widened in the lower bout; and the top was carved more thinly around the sound hole. This 18 ½”, heavily bound, voluminous beauty has a carved spruce top with maple back and sides. Outfitted with an elegant gold Frequensator tailpiece, 7-ply neck and steel adjustable truss rod, the Concert has the volume of an Epiphone and the tone of a D’Angelico and was used for vocal accompaniment to play classical and jazz melodies.